3D Printing of Coral Reef is Helping Our Coral Nurseries

3D printing has been around for a long time. In fact the first 3D printing occurred way back in the mid 1980s. Who would have thought that thirty years later it would establish itself as a such and important piece of equipment across a broad range of industries (from engineering and aviation through to healthcare, architecture and even fashion)?

It is now so reasonably priced, that 3D printers are even finding their way in homes and small cottage industries and businesses too!

The company works closely with scientists to develop artificial marine habitat infrastructure for a range of research and commercial purposes. As a not-for-profit organisation it has also won a number of awards for its work.

MARS was designed by Alex Goad in 2013 as a way to aid the coral farming industry – essentially performing the role of a nursery for corals which can grow sufficiently before being divided and transplanted back to natural reefs.

The coral was constructed in a number of pieces which were then coated in ceramic and connected together. Once assembled, coral fragments were attached to MARS to encourage them to grow.

But artificial reef structures are nothing new, so why is this so important? 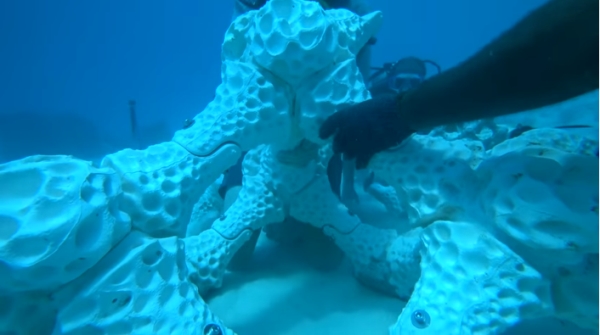 It is true that artificial reef structures have been in used for many years – from concrete blocks through to sunken ships – and with great success. The difference with this 3D printed version is that it is imitating the natural reef structure as closely as possible, which is hoped will attract more of the natural coral marine life.

Why was the Maldives chosen for this 3D printing project?

The location of Summer Island in the Maldives was chosen for the project because of the nearby coral farm where they were growing corals in ‘fields’.

It was clear coral could grow there, but there was no natural coral in the area, so to install the structure in this location would be an excellent test of it’s effectiveness in comparison to more traditional methods that were in use, for example, metal, limestone and ropes.

How did they install the 3D printing of the coral reef?

The structure would have been heavy (and awkward) to move easily to it’s location, so  all 220 pieces were printed on the island and then taken 100 metres to its installation position, where it was assembled by a team of scuba divers. 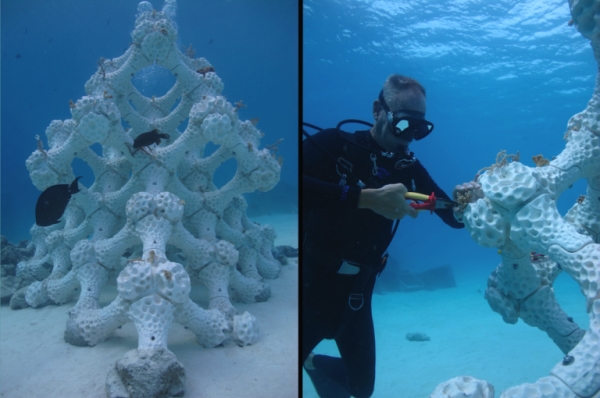 There has been 3D printing of coral reefs before, but they were printed as entire units. What made this structure different was that it could be assembled on site. This made the logistics of transporting the reef far easier and far more attractive.

What is happening to our coral reefs?

In the last 30 years almost 50% of the entire coral on our planet has died. Environmental researchers believe that 90% of the world’s remaining coral will die off before the end of this century if we do not do something to protect it.

Whilst climate change is one factor, damage from boats, over fishing and even tourism is damaging them and threatening the millions of species that thrive in them.

Does this mean 3D printing of coral reefs is the future and natural coral reefs are saved?

It would be lovely to think so, wouldn’t it? But no, 3D printing of coral reefs is specifically aimed at creating the most productive nursery environment for young coral to thrive and grow in readiness for transplanting into natural coral reefs.

Another of it’s functions was to act as a research project to see how it performed against current coral nursery methods.

So, while it will (it is hoped) increase the likelihood of young coral surviving before being transplanted, it was never designed to replace coral or eliminate the effects of bleaching, acidification or any other threats our coral faces.

Whether you’re a beginner dipping your toes into the world of freediving, a seasoned pro looking to turn professional, enter freediving championships or simply a freediver of any level who wants the best freediving holiday in the world, we’re here for you!

And check out our  You Tube channel!