2019 is already shaping up to be a significant year for Blue Abyss fans!  We’re only a couple of weeks into the new year and have received exciting news.

“As 2019 gets underway it feels wonderfully appropriate to be able to share with you some significant and very positive news about Blue Abyss.

In the late summer of 2018 we were made aware of the Wirral Waters regeneration project within the Mersey Waters Enterprise Zone. From first review, a significant, natural synergy between the region’s commercial maritime interests and history and our objectives, was evident…

…With the support of the local maritime community we have also made significant inroads at national level with Maritime UK, and the Department for Transport.

On the strength of these developments, we have engaged with a substantial international equity fund that has expressed a firm interest in providing the build capital requirements for the Wirral Waters Blue Abyss facility in full…”

What is the Wirral Waters Regeneration Project?

Since, 2018 Wirral Waters has started a significant building drive. Over £200m of investment has been secured to create homes, jobs, and new energy to the regeneration of the whole area.

The entire project will, it is estimated, create 20,000 permanent jobs.

The project of regeneration started over five years ago where massive land clearing and new infrastructure has already improved the area and prepared it for intense development across the 500 acre site.

The site is the biggest regeneration project in the UK and received the largest planning permission in Great Britain in 2012.

The Metro Mayor of Liverpool City Region, Steve Rotheram, is supportive of the project and excited about this coming phase of delivery.

“Given our focus on skills, training, jobs and housing we are very excited about the Wirral Water project and we look forward to seeing real progress” he said.

Blue Abyss have proved that while news may have been quiet, there has been considerable network building and relationship forging ongoing behind the scenes, not only with the owners of the Wirral Waters site, but important organisations within the local maritime sector, Maritime UK and even the Department for Transport, culminating in the engagement with  “…a substantial international equity fund that has expressed a firm interest in providing the build capital requirements for the Wirral Waters Blue Abyss facility in full…”

This is phenomenal news, but if that isn’t exciting enough, the Blue Abyss board “…believes this engagement will progress positively over the coming months, with a fully worked up facility design, and planning approval completed by late spring…”

I was thrilled to be able to speak with John Vickers straight after receiving the news and couldn’t wait to find out even more about Blue Abyss Liverpool. John was clearly excited and confident about the progress the team have made to get to this stage, particularly following the disappointment of failing to secure RAF Henlow as the home of Blue Abyss.

What happened with RAF Henlow?

RAF Henlow had been identified as a suitable site for Blue Abyss, however, as the land belonged to the MOD, and there was considerable pressure to meet the government mandate to build housing on old MOD land, the project became less attractive as a site proposition. This was a tense time for the Blue Abyss team, but led to the team exploring other sites across the country, ultimately resulting in identifying the Wirral Waters Regeration project site as a potential home.

So what is the latest for Blue Abyss Liverpool?

Although I know a little more about the position of Blue Abyss, there is still some way to go. What we do know, and what I am able to reveal at this delicate stage of the process, is that there have been VERY positive steps. For example, Head of Terms have been signed and positive discussions are all ready taking place with all of the other participants for the whole regeneration site. The source of the funding cannot be disclosed at this time, and as with all projects of this magnitude and ambition it is only right that Blue Abyss handle all of the information they have and/or disclose with the utmost caution and due diligence.

Have there been any compromises or changes to the original project?

I personally believe, and this is shared by John Vickers, that the additional time that has passed since the original announcement of Blue Abyss has allowed the project to evolve and also truly cement it’s purpose in areas of marine exploration, space travel, robotics and science.

John confirms there have been site visits and while there may be some small modification to the outside appearance of the building, the inside remains as planned. They also need greater consideration to the actual siting of the building, this is due to the limestone blocks that line the dry docks that were filled in many years ago. They also want to ensure the building is sited to maximise existing infrastructure and protection of history on the site, so a full historical analysis of the site is being undertaken.

Does a Blue Abyss Liverpool waterfront location make a difference? 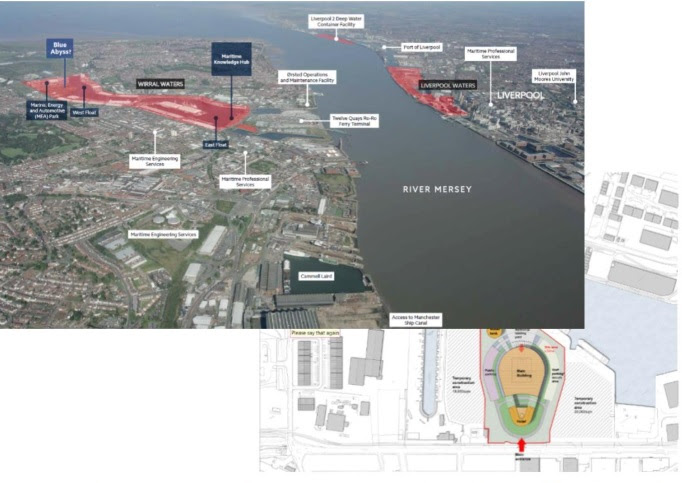 John explained that the previous site of RAF Henlow had received mixed feedback from some people who asked how such a facility could be sited away from water. When the new site was first identified as a potential home everything seemed to fit. It would have a deep maritime connection and be located on a site of innovation, regeneration for future generations. So our mindset is automatically more open and accepting to this location. It also has a number of practical advantages for movement of maritime equipment via the River Mersey too.

Tell us a bit more about Blue Abyss Liverpool, for freedivers!

As a freediver speaking on behalf of all divers out there, I wanted to check on a few facts. Here is what I found out:

Since the inception of Blue Abyss back in 2016, the project has searched for a home with the right infrastructure to support such a huge and ground breaking project. I’m thrilled that Merseyside has been settled on and Blue Abyss Liverpool will be a world leading hub for robotics, space science, diving and more. I have a very personal connection not only with my work as freediving consultant for Blue Abyss, but also with Merseyside. My mother is Liverpudlian and half my family still live in Liverpool and the Wirral. I can’t wait for the evolution of Blue Abyss Liverpool over the next few months and years and look forward to bringing you more exciting news as the project unfolds.

The Spaceflight Bill and Blue Abyss

RAF Henlow confirmed as the home of Blue Abyss!