Last time we wrote a recap of everything David has been doing to get to the point he is at today. This time we look at his final training preparations for the Philippine Depth Championships and find out more about the competition and how David performed.

Training for the Philippine Depth Championships

David talks about his two weeks training with Julia Mouce in Bali – all designed and in preparation for the Philippine Depth Championships:

Overall I was pleased with how my training went in Dahab. I hadn’t quite reached my target depth but knew that it was possible with a bit more training. I moved to Bali for 2 weeks training with Julia Mouce at Apnea Bali, I have never had any no-fins training so this was a good opportunity to spend some time learning.

In Dahab I had been diving in a 5mm top and 1.5mm vest so now that I was training in 29 degree water and a 2mm suit, it was my best chance to do a no-fins PB.

I wanted to do a no-fins dive along with a FIM dive in the Philippine depth competition and as I had been diving to 65 metres in 21 degrees water I was hoping to go a little deeper in much more favourable conditions. 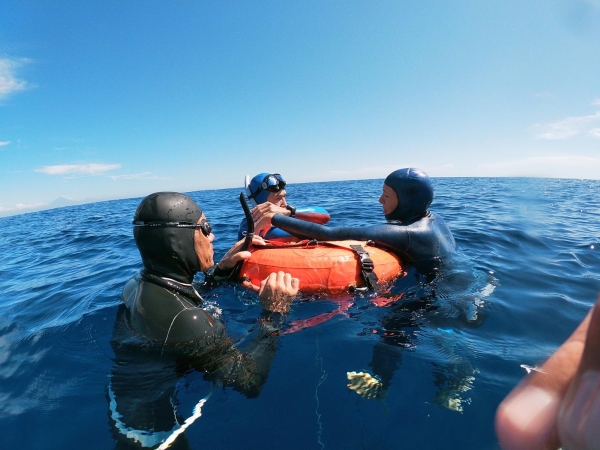 My first session with Julia went reasonably well, I learnt a lot about technique and my training drills were no-fins to 30-metres, a depth I could repeat 4-5 times working on arm pulls and kicks until freefall.

On my first dive I had an alarm set at 30 metres as I was diving on an open line and the idea was to reach that depth and then turn. I was in freefall and didn’t hear the alarm but realised I must be deeper than 30 metres so I turned. Upon surfacing I had registered 36 metres on my dive computer and the dive felt super easy.

My hopes were raised that I was capable of a 50 metre dive.I repeated the drill a few more times and ended the session happy with my new knowledge and much better form. 5 arm pulls and kicks would get me to 12 metres, one soft arm pull then mouthfill at 15 metres and finally one more soft arm pull and into freefall.

The second session was much the same, my duck dive wasn’t great but my arm pull would help me get away with that.  One rest day and then I would attempt a 45 metre dive. The next day, I did my warm up dives which felt great and then it was time to do my pb attempt.

The first part of the dive went well but as I went to freefall I couldn’t relax, I turned at 36 metres because I couldn’t equalise, which is funny as I had already been equalising fine to 65 metres!

As the days went by I had several other attempts at the same depth but kept failing around the 36 metre mark. It was very frustrating.After a week and a half I decided to go back to FIM to get the feeling of diving and equalising deeper and to remember how it felt to freefall.

I found now that my dives were 60 metres, I had actually gone backwards in much better conditions but a least it gave me some confidence back with my equalisation. On the last day of training I did manage a no-fins PB of 43 metres but I didn’t feel the joy that you should with a PB.

My training in Amed Bali was over and I was heading to the Philippines for the competition but I must admit my confidence wasn’t high. I had been failing too many dives and for the same reason each time. My soft palate would lock up, I would have air in my mouth but couldn’t use it.

I had to find a solution  and quick, as I only had two days to train in the Philippines before the competition.

The Philippine Depth Championships is an AIDA Philippines sanctioned competition, registered with AIDA International, and run under AIDA rules.

There were two competition days.

Overall standings will be determined by adding points from each discipline. The maximum depth for the competition was 120 metres. May and June are usually the best months for freediving in the Philippines. Very little to no wind make great surface conditions.

The water temperature on average is  29- 30 degrees on the surface. This temperature stays constant until a depth of around 50 metres. Below that, the temperature usually drops by not more than one degree. Below 90 metres the temperature is usually not less 26 degrees. Visibility is around 25- 30 metres.

The Filipino male and Filipino female athletes with the greatest number of points were crowned the men’s and women’s overall champions respectively, with the best discipline awards open to all nationalities.

As there were a lot of freedivers competing for the first time, a checklist was gone through for all competitors. Competitors saw their names, their nationality, their announced dive and the three important times they need to remember:

When the athletes are checked in at the registration table, they are measured for their oxygen saturation levels in their body with an oximeter just as a baseline before their dive. They can then warm up before their dive. 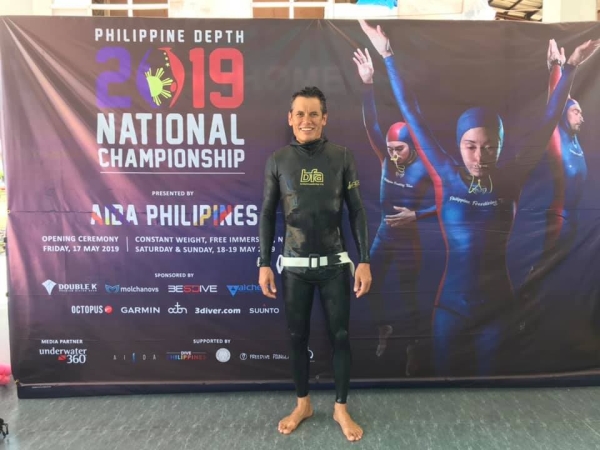 I arrived in Panglao after an overnight flight from Bali, I was exhausted as I can’t get to sleep on an aeroplane, so spent the following day trying to catch up on sleep. 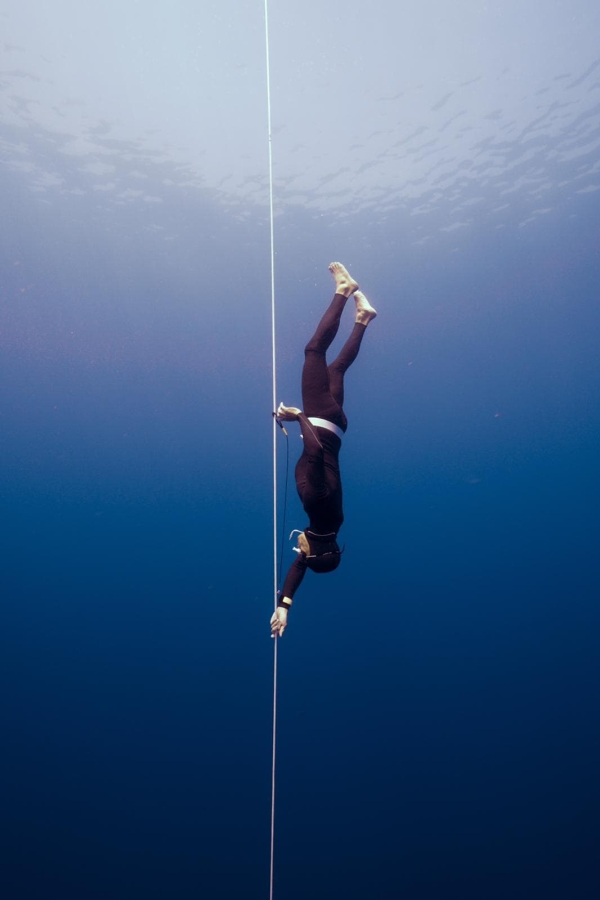 I was going to see how the two days training went before making my announcements for the Philippine Depth Championships.

I knew I had issues with equalisation and was hoping to fix the problems in time. I did FIM to ease into the new surroundings. The diving conditions were probably the best I’ve ever dived in, clear blue sea, 29 degrees and beautifully flat.

A five minute boat ride and we were there. (in Bali there was a fair shore swim to the mark so here there were no excuses), I was nice and relaxed before my first warm up.

My warm up dives felt good so I set the line at 64 metres.

Again I dived and had to turn at 60 metres, same problem, soft palate locking up. This was now developing into a bad habit. I spent the rest of the session doing FRC ( Functional Residual Capacity) dives to try and sort out my problem. The trouble is I can nail everyone of them, my equalisation goes perfectly to 30 metres every time but I was having trouble replicating that on a deep dive.

After the session I did lots of dry mouthfill exercises paying special attention to the position of my tongue when the air volume gets low in my mouth. Again dry I can nail every one.

The next day training, this was my last session before the competition so I needed to see an improvement before making my announcements.

The highlight of my day was I shared the buoy with Kurt Chambers and Dean Chaouche so I could see how it was meant to be done. 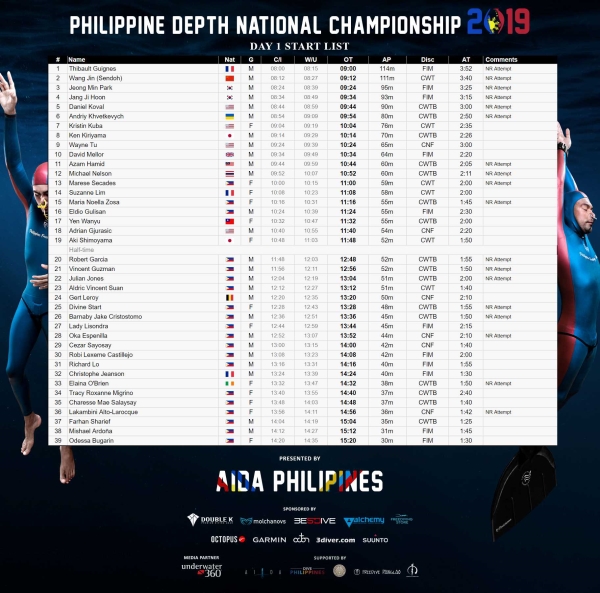 I decided to announce 64 metres in FIM, my thinking was I had already done that in competition so anything less felt like a step backwards and if my equalisation went well I could easily do it, the worst that would happen would be an early turn. 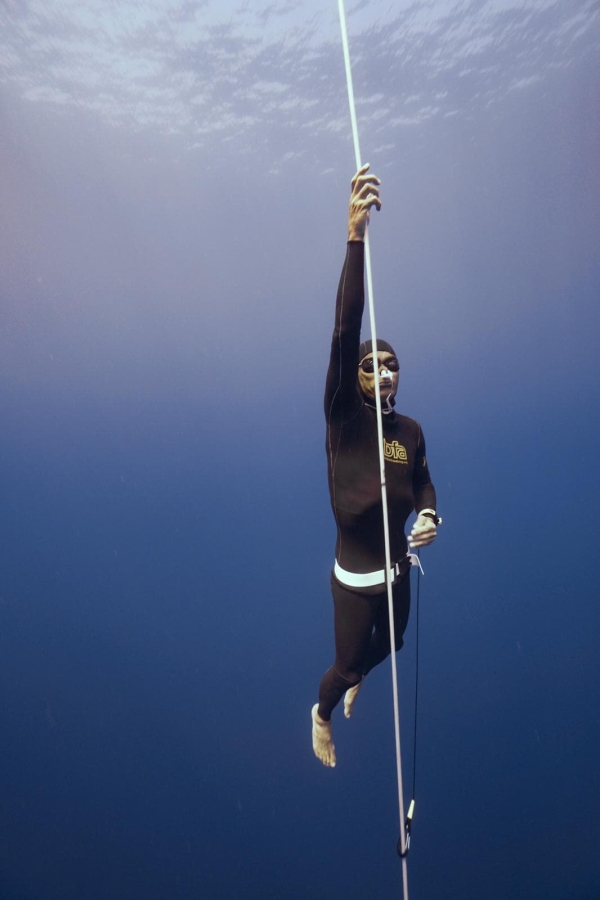 Turns out that’s what did happen, early turn at 60 metres and a yellow card.

I was obviously disappointed but I half expected it as that was exactly what had been happening in training.

I tried to take a positive from the dive and thought at least I can equalise to 60 metres so if I can relax I can certainly get a white card in no fins at a much shallower depth.I announced 45 metres even though 43mtrs was my PB. I knew I had the breath hold. I was strong enough, I was mentally ok with that number so it was totally down to equalisation.

I broke my personal rule about announcing deeper than my training dives but this had now become a thing with me. I had spent nearly 3 weeks trying to do a dive I should easily be able to make. I had previously done in competition 36 metres in a 7mm suit in 8 degrees water, also 41 metres in 24 degrees water without any coaching so I was super determined to do this dive after all the hard work I had put in.

As official top came closer I was feeling good, relaxed and calm and ready to get a white card.I started the dive ok and went into freefall.

I took a second mouthfill charge at about 22 meters and then just tried to relax and drop. I really wanted to make sure I had enough air in my cheeks to do this dive so I tried one more small top up.

I should have just trusted what I had in my mouth and relaxed. It would have got me there but by the time I took my 3rd charge I was already too deep, it caused me to swallow. All my mouthfill gone! I was screwed from then on.

I did what I could and managed 41 metres but the dive was a mess, coming up from 41 metres with no fins when you’re pretty peed off isn’t the most pleasant thing I’ve had to do but I totally deserved it. I should have trusted myself, you don’t need three charges to get to 45 metres, you actually shouldn’t even need two so it was complete overkill.

Another big mistake made and another lesson learnt.Two yellow cards, another disappointment but at least some big competition experience.There were some top class athletes in the field so it was good to meet a few of them. 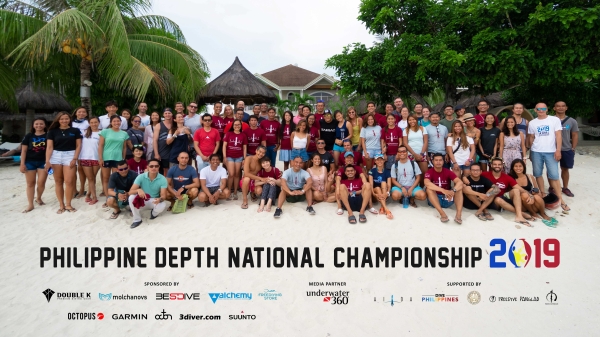 Looking back I shouldn’t have entered the competition.

I should have stayed training and working on my weaknesses.

I didn’t give myself enough time to do this.

My biggest gains were when I stayed in one place for six weeks, so I think it would have been better to stay in Bali or Gili T instead of wedging in another competition.