In David’s last diary entry David talked about the highs and lows of the recent Dahab Championships. David has now had some time to reflect on his performance and analyse what he did right and what he did wrong. Read his post freediving competition analysis here.

My Post Freediving Competition Analysis is that I was  pleased with the overall result and how my training went in general. 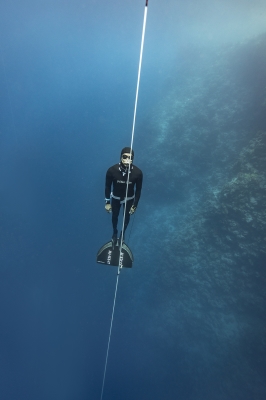 I was there for six weeks and never got sick once or tired. I put that down to good eating, eating more meat, and also the vitamin supplements I was taking.

Regarding the competition dives I learnt a few more things too.

I had been stuck at 55 metres because of equalisation but two days before the competition I worked something out and was able to equalise deeper.

I did 2 x 65 metres FIM dives and one was just a day before the competition. The dives felt amazing and I know if the line was set deeper I would have kept going.

I decided to stick to my new plan and only announce what I had done in training. As it was a CWT dive that meant 55 metres with a monofin.

I got a white card and I was in full control of the dive and even had more air to equalise with if I had gone deeper.

I was thrilled with my white card. It’s such an amazing feeling when that happens and makes all the training worthwhile.

I finished the day feeling really happy knowing that 55 metres was now a really comfy dive for me.

The second discipline was static.

This is not my favourite and the fact that it was in the sea made it worse as I had never done a proper static in the sea before.

I announced a really short time hoping that would mean I would go first as normally that’s what happens in pool comps.

Well it backfired and actually it worked out that I would be last!

My static preparation takes 45 mins usually so I got to the event in good time. What I didn’t realise was it was being held from a beach bar and by the time I got there most of the seats had gone along with all the shaded areas so it made my preparation difficult.

I was a little disappointed as I was hoping for nearer 6 mins but it was still a white card in an environment that didn’t suit me so I wasn’t too hard on myself.

The simple lesson I learnt from that was DON’T DO STATIC Haha!

For the third and final discipline I did FIM.

I slightly broke my new rule by announcing 66 metres -my training dives felt so easy at 65 metres so I was certain I would do it.

My warm up dive went well, I had put my arm around the line on decent so I wouldn’t drift from the line, I felt good so I decided to do that on my main dive.

Anyway as previously explained on my main dive it messed up my free-fall and made the whole dive very unenjoyable.

I couldn’t relax, I swallowed my mouthfill twice – but still managed to get to 64 metres.

The only positive thing I got from the dive was the fact that even though I desperately wanted a white card in the competition and I could almost reach the tag, I turned. It really wasn’t worth risking an injury that would stop my progress in my training for other competitions.

I got a yellow card and wasn’t happy, you don’t get the euphoria with a yellow but it was still points on the board.

After thinking for a while I consoled myself by saying I was only 1 metre away from my PB on a dive that was just messy and horrible so I know it’s just a matter of time before I can beat it.

I did realise a fault in my strategy for this announcement though. My two 65 metres training dives were almost faultless by my standards, they couldn’t have gone any better and I got carried away thinking I would soon be doing 70 metres.

Yes maybe I could if everything went like a dream again but of course it never does.

In my announcement I never left enough room for error, especially as it was a competition.

If I had announced 64 metres I would have got a white card, forgot how shitty the dive felt and been super happy with 3 white cards. Again, another lesson learnt for future competitions.

You learn much more from your failures so gaining these experiences is going to make me a better freediver.

With just a week to go until his next competition, David is already in Bali preparing for the Philippines Depth Competition.

I’m now in Bali preparing for the Philippines depth competition.

Check out the difference in my flexibility in just four weeks! 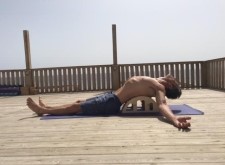 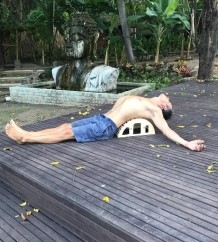 I’ve decided to do a CNF dive as in warm water and a 2mm wetsuit it will be my best chance to set a PB.

We wish David the very best of luck, and will keep you posted with his progress in our next blog!

Catch up with David’s progress in our next blog, coming soon!