Scientists at MIT have designed a prototype furry wetsuit modelled on otters and beavers, who manage to dive and stay warm by trapping a layer of air in their thick fur. Read how this could mean the development of thinner and more flexible wetsuits for freedivers and how it works.

Why have a furry wetsuit? 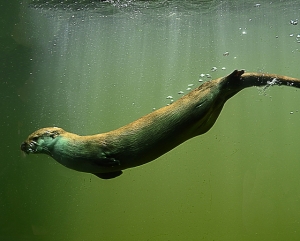 Whales and walruses have a thick layer of blubber that keep them warm in the water, however sea otters and beavers lack this but are still able to keep themselves warm in cold water.

Their secret is to trap air within their own furry wetsuit. Even though it looks like they only have one pelt, it contains two kinds of fur: long and thin ‘guard’ hairs that act as a protective shield for shorter and denser ‘underfur’. The thought was that the guard hairs kept water from getting to the underfur but there was no mechanical understanding of that process.

If a furry wetsuit could be designed for humans, then it could mean the end of neoprene and the development of a far thinner and more flexible material to keep us warm in the water.

Who has designed the world’s first furry wetsuit? 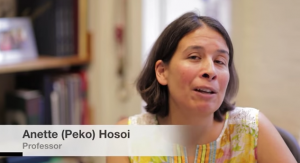 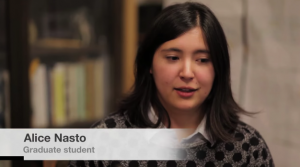 Anette (Peko) Hosoi is a professor of mechanical engineering, associate head of the department at MIT, and leads MIT’s STE@M (Sports Technology and Education at MIT), a program that encourages students and faculty to pursue projects that help advance sports technologies.

In 2015 she led a group of students to Taiwan, where they met the wetsuit manufacturer, Sheico Group. They wanted to know if there was a bioinspired solution for wetsuits, especially for surfers, who go in and out of the water and want to shed water on the surface but keep warm under it.

Hosoi assigned the problem to Alice Nasto, who looked to beavers and sea otters, who ‘entrained’ air within their fur.

The team created fur-like surfaces and then plunged them into silicone oil at various speeds, videoing the process. 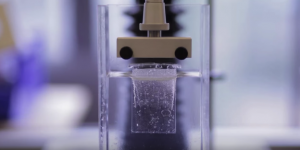 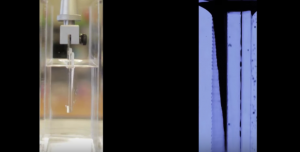 The researchers could see within the hairs a clear boundary between liquid and air, with air forming a thicker layer in hairs closer to the surface, and progressively thinning out with depth. Among the various surfaces, they found that those with denser fur that were plunged at higher speeds generally retained a thicker layer of air within their hairs.

‘We are particularly interested in wetsuits for surfing, where the athlete moves frequently between air and water environments,” says Hosoi. ‘We can control the length, spacing, and arrangement of hairs, which allows us to design textures to match certain dive speeds and maximize the wetsuit’s dry region.’

Hosoi and Nasto then developed a simple model to describe this air-trapping effect in precise, mathematical terms. To do this, they modelled the hair surfaces as a series of tubes, representing the spaces between individual hairs. They could then model the flow of liquid within each tube, and measure the pressure balance between the resulting liquid and air layers.

‘Basically we found that the weight of the water is pushing air in, but the viscosity of the liquid is resisting flow (through the tubes),’ Hosoi explains. ‘The water sticks to these hairs, which prevents water from penetrating all the way to their base.”’

Hosoi and Nasto applied their equation to the experimental data and found their predictions matched the data precisely. The researchers can now accurately predict how thick an air layer will surround a hairy surface, based on their equation.

How can a furry wetsuit work for freedivers?

If the air can remain trapped in the furry suit when a freediver dives to depth, then this may be a wetsuit design that can keep even the coldest freediver warm whilst not encasing them in very thick and restrictive neoprene.

However, a concern for freedivers would be the amount of air the suit carried and how this might affect buoyancy as the freediver descends.

Nevertheless, it’s an incredibly exciting development and we can’t wait to try one out in the water!

Want your very own furry wetsuit? 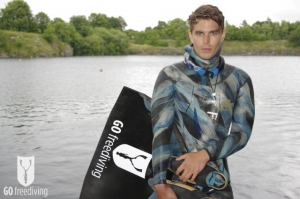 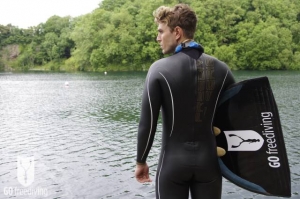 Unfortunately furry wetsuits aren’t yet available to buy, however you can get the best wetsuits from us. We sell the incredible Aqua Lung Sport Apnea Suit and also the entire range of Elios suits which you can get by emailing emma@gofreediving.co.uk

Then keep in touch by subscribing to our mailing list for weekly newsletters with exclusive articles, news, films, offers and more!