How Carl Atkinson got into freediving and how Taekwondo helped

Carl Atkinson started his freediving journey with Go Freediving and is representing the UK in the AIDA team world championships in Greece this September. We sat down with Carl to find out what inspired him to take up freediving, and how Taekwondo helped him train and adapt his body so quickly to a new sport.

Carl Atkinson did his level 1-3 freediving courses with Go Freediving, as well as our monofin course. Since then he has progressed quickly to being a confident 75 metre constant weight diver. This is the first part of a series of interviews we did with Carl as he prepares to represent his country, and we’re proud to be sponsoring Carl and bring his freediving journey and experiences to a wider audience.

How Carl Atkinson got into freediving

Emma Farrell:
So what made you decide to get into freediving and when did you start?

Carl Atkinson:
It’s sort of a couple of exposures. Like many things, it takes seeing it a couple of times. One of the first things I saw was a BBC nature documentary, years ago, which Tanya Streeter presented. I remember, I was 10 or 11, and my dad called me in going, look, this is freediving because he had been a quite keen scuba diver back in the 70s so he knew freediving and had done some spear fishing as well.

So I saw that and that was one of the first times I was like, wow, this looks incredible, I’m really interested in this. I was just sort of in awe of it. You’ve literally got this lady in a wetsuit and fins and it was pretty incredible. So that was the first exposure and I always kept it in my mind. I knew it existed and thought it was cool. After you go to school, do your A levels, go to university and all that stuff.

After university, one thing I knew I wanted to do was scuba diving. It’s just something I fancy doing and my dad had talked about going back into it. Literally, straight after graduating I said to him, let’s do our open water course and get into that. Through the scuba diving, I did various dives around England and I started to see spear fishing.

Got really interested in doing that and noticed that was all done freediving. So I started getting some gear, started doing that, practicing just a little basic breath holding stuff, still more like snorkeling at the time, 5 to 10 metres top stuff.

Then the big turning point for me was when I went scuba diving for two weeks in Egypt and in that time we had a trip off to Dahab, and one of the dives we did finished in the Blue Hole. I remember coming over this ridge where you just enter the Blue Hole and suddenly I saw these vertical drop lines and this guy just coming up literally with nothing but a pair of fins. He had one nose clip on his face and a wetsuit, just coming up from this abyss. I was like, ‘oh my God, this guy’s got no gear on’. And I could see all these people training, I was like, and this is freediving. It seemed to me that everyone was freediving.

I started talking to these guys in a café after the dive. They were two French guys and basically I was in complete awe. At that point I was like, ‘this is it. This is it for me.’ The thing that appealed to me was I have a heavy sports background as a kid with hockey and taekwondo and freediving seems more sporting. I like scuba diving, I still do, but it’s more like a past time, like going for a walk, a stroll in the park. Something about freediving has got that absolute lifestyle thing going on, honing skills, and the fitness. Everything like that which appeals to me in sports. 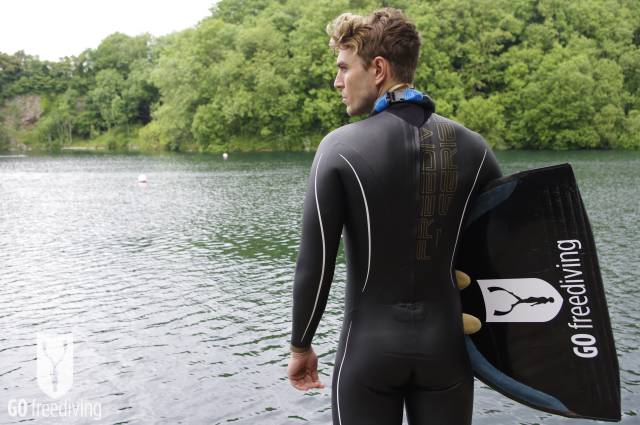 Coming back, I had a girlfriend at the time and I got more into the snorkeling side of things. I’d been going on holiday with her and I snorkeled down to 100 feet on one of these trips with a mask and a snorkel on. By this time she’s like, ‘I want you to get some proper training. This is unsafe. Please go and seek somewhere.’

We did a whole lot of Googling and found Go Freediving and I saw there were courses in it at Vobster Quay, and I thought, that’s funny, I’ve actually been there scuba diving. Let’s do this. Let’s see what I can do.

Literally, that year I did my SSI level 1. That’s where I came and met you and that was the beginning of it all really. From there it’s just taken off. It became an obsession really, which I think often things can and when you get into them you hone a bit more skill, you do a bit more training. As soon as you are out of the water you are thinking, when’s my next time in the water. What can I do to improve myself the next time and things like that? It’s an interesting mental process you go through. It’s sort of like Martial Arts in a way.

How has Taekwondo helped Carl Atkinson transition to freediving?

Emma Farrell:
Tell me about your Taekwondo. I think that’s a very important part of your story, how good you are at that.

Carl Atkinson:
It’s quite a big part of my life. I did martial arts since I was about 7.5—8 years old. It’s probably the kind of thing your parents do when they want to release some energy in a very hyper active kid, which I think I was at the time. It was good.

One of the biggest things is your mental discipline, your control. You go there thinking I am going to be a Power Ranger. Then you see these guys who are incredible at the sport and know about the flexibility, the stamina, the agility, and you realize, I am not very good. I need to train, I’m not naturally just a power ranger.

The discipline and training with that, so you do an hour and half of training, but at least the first half hour it’s just stretching, warm up and then back to stretching and learning that discipline. The whole building process as well. It’s going to take you time. It’s got to be perseverance, patience, that whole mixture of elements that you’ve got to just keep ticking over and hugely the mental side and mental discipline and mental control that you’ve got over yourself really helps. 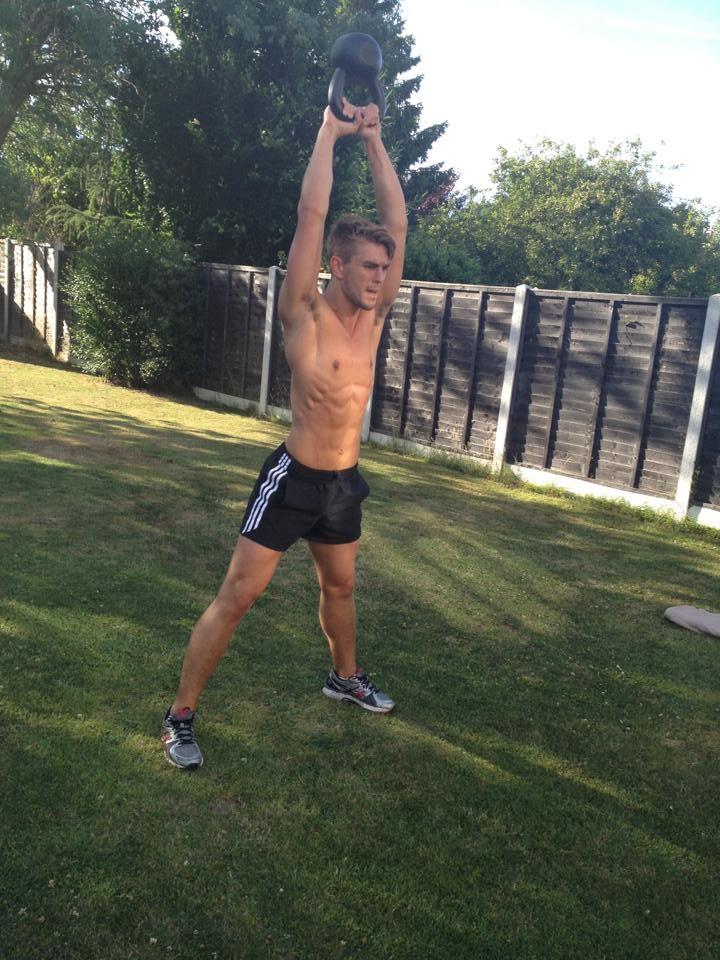 How has your taekwondo helped your training for freediving?

Carl Atkinson:
In many respects. There’s the element of learning techniques in a lot of taekwondo and a lot of martial arts. Almost like gymnastics in a way. You’ve got this perfect model, here’s the move that you need to effectively recreate and make it perfect and efficient. You are learning these physical movements to perfection, which completely correlates with picking up monofin technique, even equalization techniques and frenzel.

It’s much more sort of inside you in freediving, there’s still these really similar elements of learning your body, where all your muscles are and really trying to perfect that action and absolutely honing it, making it better and better and again that patience and perseverance. Definitely that model of finding, recreating a perfect model as it were. This is a picture of this kick, here’s the perfect model of a monofin technique.

Taekwondo made me incredibly supple so eventually, I was able to do splits and things like that quite happily. My body became really elastic, flexible, but speedy and fit and keeping the strength up as well, which made an huge impact coming into any other sport I’ve done since then.

My body is in this condition that you can just get moving very easily and it really helped. Things like diaphragm that had become part of the game. But I was like, I know this. I know to get a muscle that’s tight or a soft tissue part that’s tight. I know how to work on it. I know how disciplined I have to be with it and how to go about this, so let’s do it like you do it Taekwondo.

Often with Taekwondo you’d stretch for training. You train for an hour solidly, be incredibly warm and then your coach would be like, we are going to stretch again, because this is where you become more flexible and start applying these principles to diaphragm stretching and very quickly found myself going after my level 3 with you, straight out to Egypt and going to depths and realizing I lost that crushing feeling.

I came away from that first week and I think I did 64 meters. It was the first time I’d ever had a chance to do some depth training and I started really getting the merits of it. I remember feeling a slightly pushing feeling on my chest, now it just seems to be more and more supple there and I’m losing that feeling.

Really applying those same principles in flexibility and conditioning of the body from Martial Arts transferred so well into freediving, hugely and pre-stretching whilst psyching yourself up at the same time. The mental element of it. That’s huge. And then the competition side of Taekwondo, that’s hugely a mental side. One thing I find incredible about freediving is this. You want to perform, you want to do everything really well. You want to get yourself in the zone, but you want to calm yourself down. How do you do something when you are trying to push yourself the hardest you have done before in terms of depth, distance or time, but at the same time you don’t want to raise your heart rate. You want to keep yourself calm. I’ve never seen a sport with quite that mental discipline to that level.

Taekwondo slightly helped with that. When you go into competitions it’s slightly different, but in a way it’s that keeping composure so that when I’m stepping into a ring here, I don’t want to go hell for leather. I know if I go completely flapping my arms around I am going to lose that round. It’s keeping this complete composure, but still getting yourself in the best place possible to still perform at your maximum point.

There’s so much I can be like, I know I have done this before, let’s tweak it slightly. This is a different sport. I know there’s that place in my brain I have to get to which is the ultimate place to get to perform. We’ve been here before, so let’s apply it but slightly differently

Emma Farrell:
What have you achieved in Taekwondo? 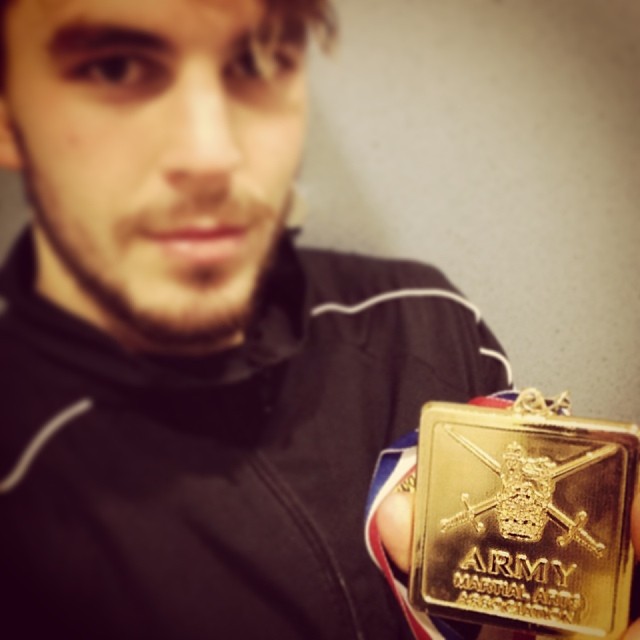 I’ve won the national army championships for British taekwondo. I came second in the London International Open. Competed at the national championships. I’ve done some fairly high competitions, pushing the bar up each time. In the international circuit, you start getting people from all around the world competing against you and you think, this what other countries can produce, which opens your eyes a bit more so you think like this person is a bit different in the way they come and step into the ring. Again it’s that mental battle beforehand.

Things like media are getting involved as well. You’ve suddenly got cameras pointing at you, so in a competition, you are keeping your head focused. It’s just another event.

Read the next article… The disasters and triumphs of Carl Atkinson’s first freediving competition.

Read Part 3: How Carl warms up for a deep constant weight dive