Watch a virtual tour of Blue Abyss, the 50m dive pool planned for the UK, and hear from the man behind it all.

Go Freediving is delighted to bring you the latest updates, exclusive new photos and a virtual tour of Blue Abyss that takes you to the bottom of the world’s deepest swimming pool.

The site is now planned for the University of Essex on their Colchester Campus. The complex will house both hyper and hypo-baric chambers, a micro-gravity simulation suspension system, an R&D facility, boutique hotel, and training facilities.

When you watch the virtual tour of Blue Abyss, you will see the sheer scale of the project. It is four times deeper than NASA’s training pool and has been endorsed by astronaut Major Tim Peake. John Vickers, chief executive of Blue Abyss, has already been in discussions with Chinese authorities and the European Space Agency. ‘We want this to be a global facility’ he told us. 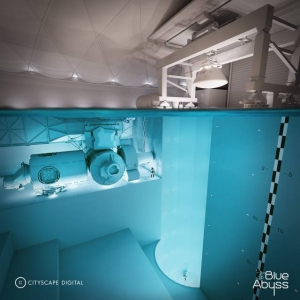 Watch the virtual tour of Blue Abyss down to 50m

The virtual tour of Blue Abyss was created by Cityscape Digital, and takes you from above the waterline to the bottom of the 50m shaft. John Vickers told us ‘It brought my vision to life. I had not expected it to be as visceral an experience as it turned out to be. People can now see what I’ve been thinking about and if this facility can help young people get more involved or interested in our marine environment then that would be great.’

He also told us that construction is expected to take between 18 months and two years and the project is expected to cost around 40 million sterling, almost a million for every metre of depth! 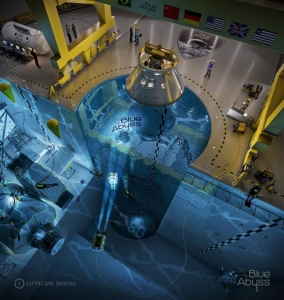 Exclusive Freediving Consultants for the project

Emma Farrell from Go Freediving is the exclusive freediving consultant for the project and was delighted to watch the virtual tour of Blue Abyss. ‘I’ve imagined it over and over in my head’ she said, ‘but nothing compares to watching it on screen. I can’t wait to dive there when it’s more than virtual reality!’

To find out more, visit the official website for Blue Abyss 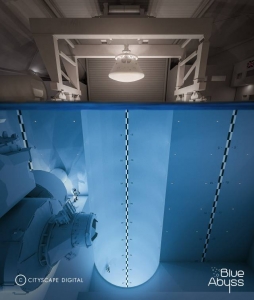