All of David’s training – his highs, his lows his personal bests, his travelling have all been leading to this event – The World Aida Freediving Championships!  So did David follow his awesome performance? Find out in the final day of his championship blog!

Day Three of Competing at the Aida Freediving World Championships

The night before my last dive, I thought I wouldn’t be able to sleep because of the excitement, but I was so tired I actually slept well.
I really wanted 3 white cards and I was feeling very strong mentally and physically so I decided to go for it on my last dive.
I announced 65 metres CWT – I’d only done this dive once before but nerves weren’t a problem nor was breathhold or strength so why not? It was a bit of a gamble but I felt I could do it.
I woke up feeling good again. My prep routine by now was feeling so familiar I was almost on auto pilot – it took away any niggling thoughts that I might have forgotten something and left me to just concentrate on my dive.
Same routine out to the platform and nothing but positive thoughts.
I started my usual warm up dives – a 20 metre hang without my monofin and then a deeper dive with my fin on so I knew how freefall would feel.
I’d heard the thermocline had dropped to 34 metres so I did my second dive deeper so that I could feel what it felt like at that depth. It was definitely harder but I was super happy with how I felt after both dives. 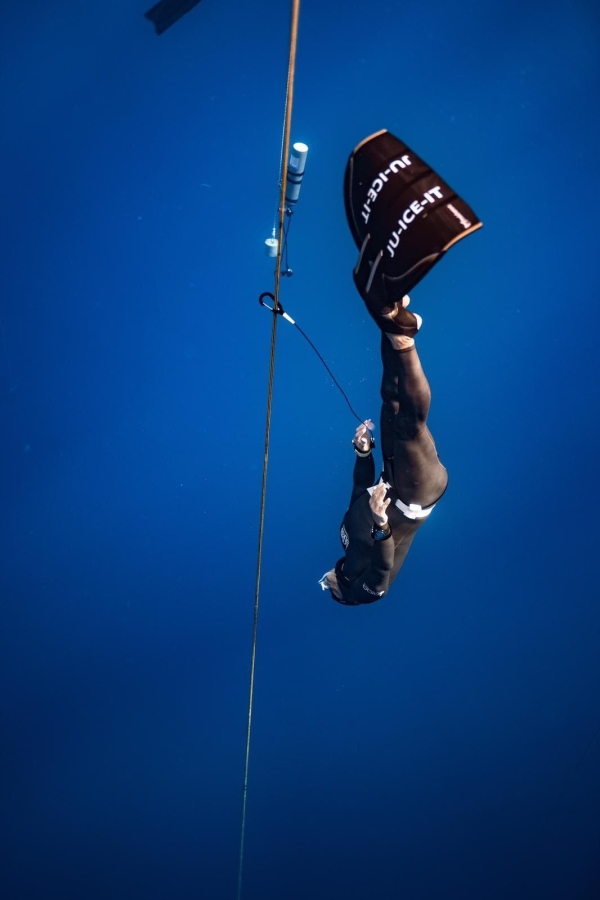 Official Top (OT) came and I felt great, no nerves and nice and relaxed. I took my big breath and off I went.

I messed my duck dive up a little but not enough to worry me. I concentrated on easy fin kicks trying so as not to exert more energy than I needed to and also keeping my throat and chest area relaxed to aid equalisation. So far so good!
I got to freefall and then took my mouthfill. Unusually, I felt the need to swallow pretty quick, so I did, thinking it’s better now than later. By the time I swallowed and recharged my mouthfill I was already at 27 metres and deeper than I wanted to be. I have an alarm on my computer set at 25 metres. This is my alarm to say no recharge after it because it’s harder to recharge and makes relaxation afterwards much harder, but I couldn’t help it, I had to recharge.
Sure enough I struggled to find real relaxation. I was in freefall but not feeling great. I was trying my best to scan my body all over to release any tension but time wasn’t on my side. I hit the thermocline at 35 metres, just as I had a contraction and swallowed most of my mouthfill, I knew then I wasn’t going to make it.
It was now down to how long I could make the little air that I had last. I’ve always struggled with trying to move the last bit of air around my mouth to equalise with – my soft palette closes up and then I can no longer equalise. This is exactly what happened, so now I was sinking just waiting for the point when my ears would tell me to turn. The pain started building so that was it. I didn’t want to risk an injury so I turned and made for the surface. I couldn’t help but feel disappointed but I made a mistake and that was it.
I surfaced with a rye smile, I did my protocol and looked at the judges. The judges ask “do you have a tag” even though the answer is obvious as there is always someone on the boat telling everybody what depth you’re at, the answer should have been “no, because my arms are not 9 metres long” but I just answered a simple “no”, I received my first yellow card and that was it.
The end of my months of training had finished on a small disappointment but overall I was super happy.
There were many negative things said about the organisation of the competition but if I had the chance I would definitely do it all again.
It has been the best experience of my freediving career and something I will never forget. It has given me even more enthusiasm to train and work harder to become a better freediver and I am so grateful to the BFA for giving me the chance to represent team GB.
Thank you also Emma and all of Go Freediving for your support and messages, it made things feel even more special.
Onwards and upwards now, one more competition in Cyprus before a well earned rest.