Day 10 and it’s all about buoyancy issues, trapped air and a worrying X-ray result for Honu

After our usual morning routine it was time to see whether it was possible to remove some of the trapped air for Disco and fellow juvenile Olive Ridley Amber. Both these young turtles (estimated to be somewhere between 7 and 12 years old) have buoyancy problems. This results in them being unable to dive due to air between their body and their shell. 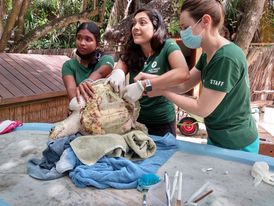 There are a number of reasons why turtles become buoyant – sometimes if they have been caught in ghost nets at the surface for a long period, the air in their lungs can become redistributed to the upper part of their lungs meaning they are off balance for diving.

In the case of Disco and possibly Amber it is thought that during entanglement they have struggled to the point of tearing their lungs. In time these tears will repair, but as with any sea turtle recovery this can take a long time.

Disco has so much trapped air that her shell has actually distended, and she is much rounder than she should be. Olive Ridley turtles generally have a fairly flat shell, but both Disco and Amber are floating higher in the water than they should be.

To remove the trapped air, the turtle is placed on its side and a needle and syringe attached to literally suck the air out from between their body and their shell. This has been performed on Disco in the past, and her shell completely deflated, only to re-inflate hours later. This is likely as the tear in her lung had not yet repaired. 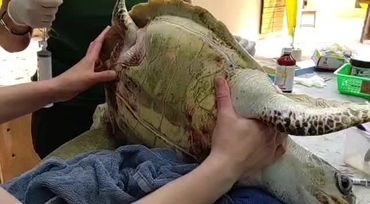 Both turtles were treated and a surprising amount of air was removed from where it shouldn’t have collected. After the treatment was done, it was time to put them back in their tanks and wait and see the results. 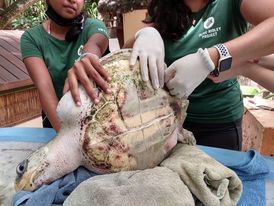 The newest arrival Honu, whose flipper amputated in the net when she was rescued was x-rayed again to check the status of the bone, and also had ultrasound performed – to discover she was in fact a female.

The results of the x-ray were not great, and showed the remaining bone in her amputated limb was lytic – starting to break up. She would be carefully watched over the next day, and a decision taken on whether the bone was salvageable or not.