Day 12 – A big day for Honu – Several hours of surgery, and an unexpected, amazing encounter with Manta Rays! 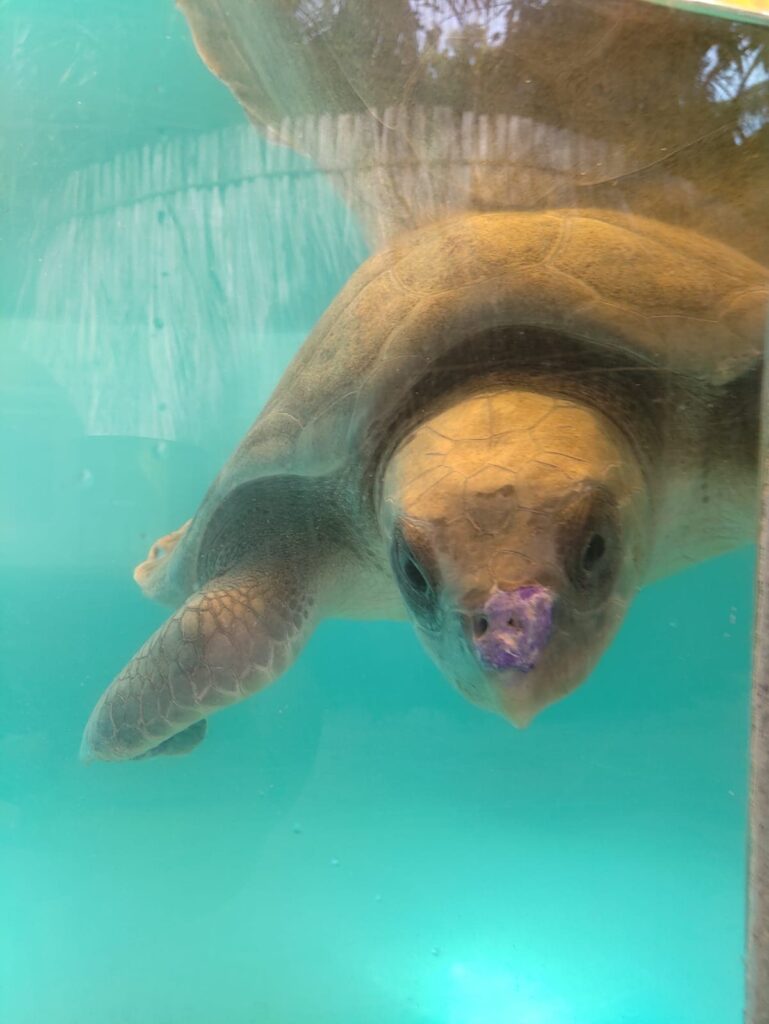 Surgery day was upon us, and while vets Minnie, Claire and Paul readied the clinic and prepared the drugs which were required, Zein and I opened up the rescue centre and did our usual tidying up job.

The time came for Honu to be removed from the tank and taken to clinic. The plan was to remove the lytic bone which had broken off when her flipper was amputated by ghost gear, and to try to improve the flesh around her nose, which had become inflamed due to rubbing the side of the tank. The inflammation threatened to impact her breathing, as one nostril was already somewhat compromised by the inflammation.

The surgery was expected to take about an hour. A carefully calculated cocktail of Propofol, ketamine, tramadol, meloxicam and lidocaine were administered. This combination of drugs was to sedate her, provide pain relief, anaesthesia, and prevention of inflammation.

Once under and intubated, Maldivian intern Zein had the important job of breathing for Honu by connecting a bag to the intubation tube and providing 3 small breaths every 2 minutes. Every 5 minutes Honu’s heart rate was monitored using a doppler heart monitor. 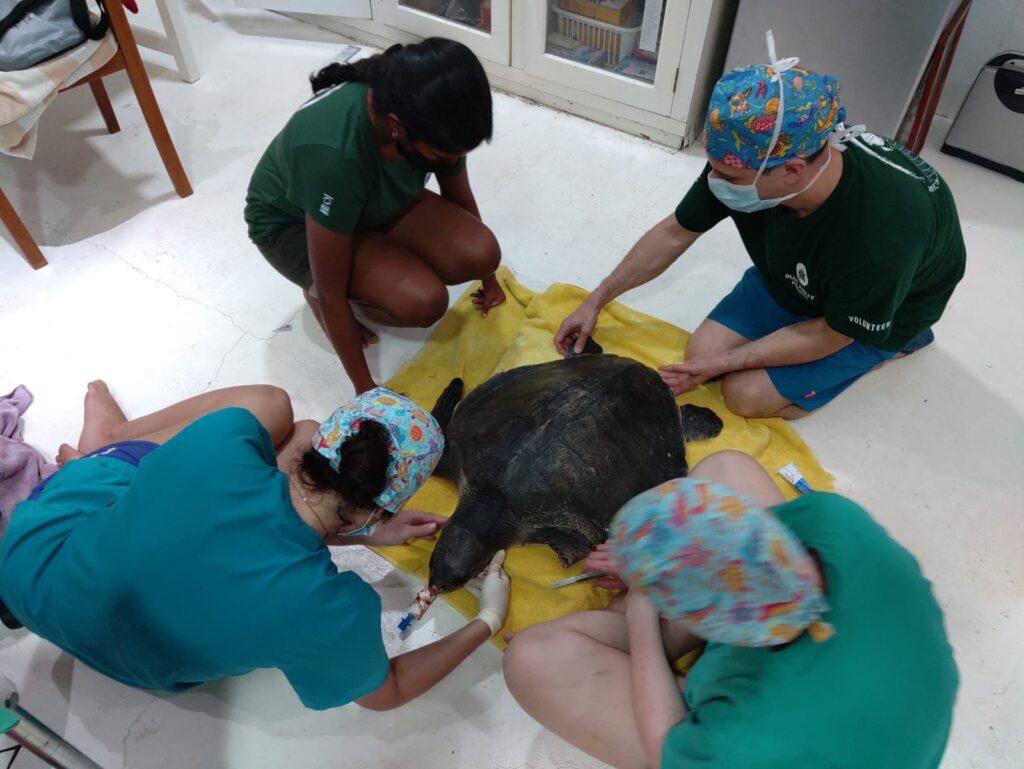 Surgery started by cutting around Honu’s existing stump, to expose the bone. This took longer than expected as the tissues were quite mangled, and it was not easy to spot and tie off existing blood vessels. I was in charge of getting equipment ready for the vets to use. Cannulas, syringes to prepare flush for the cannula, swabs and so on. 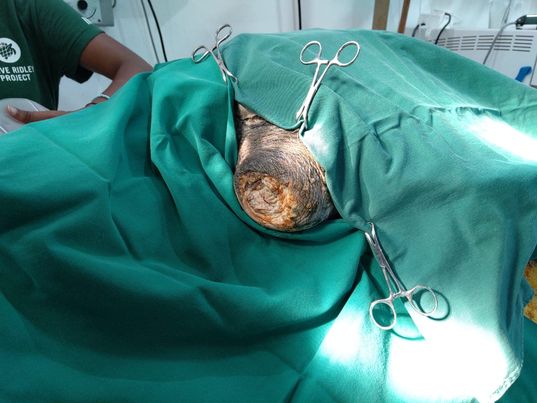 At one point I also had to help with hydration of vet Claire as we were in a room with all air conditioning off (to keep Honu from getting too cold), and it was taking longer than expected. After about 3 hours, the humerus was exposed and removed. 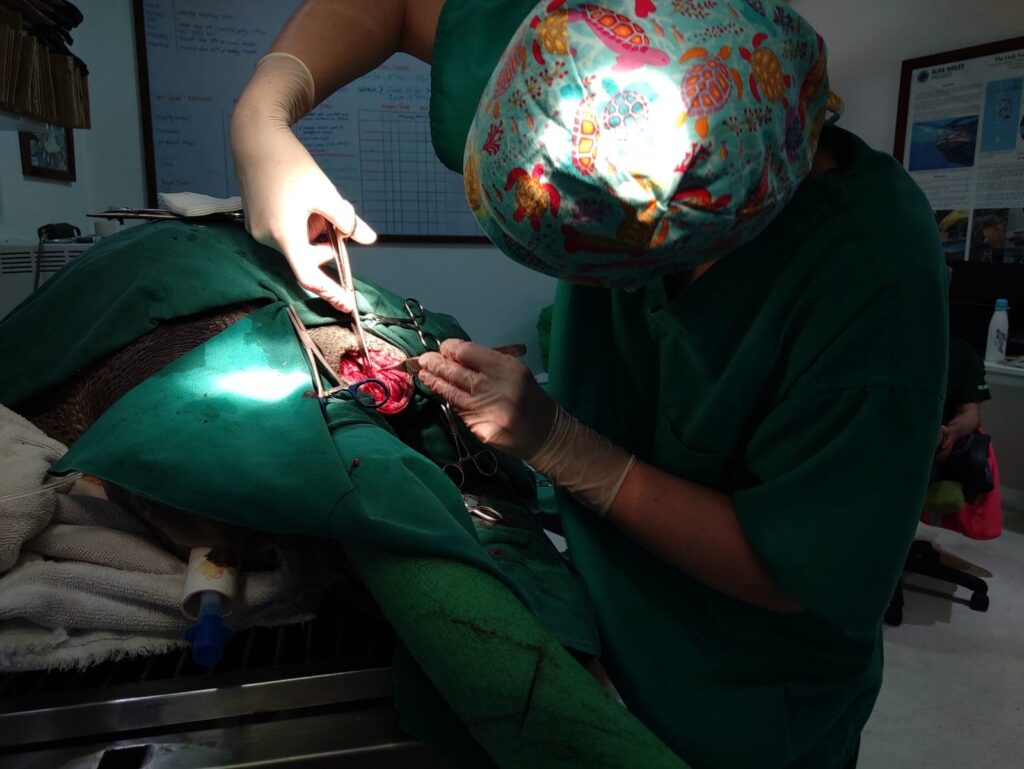 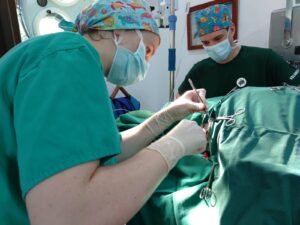 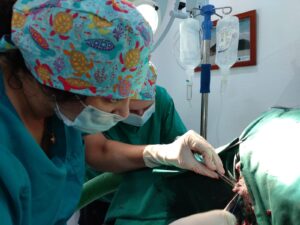 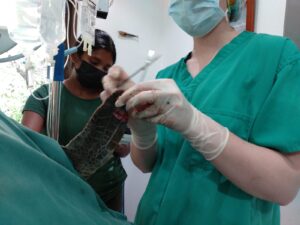 While the muscle and skin were stitched up, we had noticed that she had a bone exposed on her third digit on her remaining fore flipper. Vets Minnie and Paul discussed the best way to proceed, and it was determine to shorten the bone a little. A pair of bone cutters were used to snip away a small piece of the knuckle, and the wound was cleaned. Unfortunately, Honu had a hole clean through the flipper where the bone had protruded. The very end bone (toe) was still intact and was in good shape, so her flipper was stitched so as to make it a little shorter on the third digit, albeit still functional. 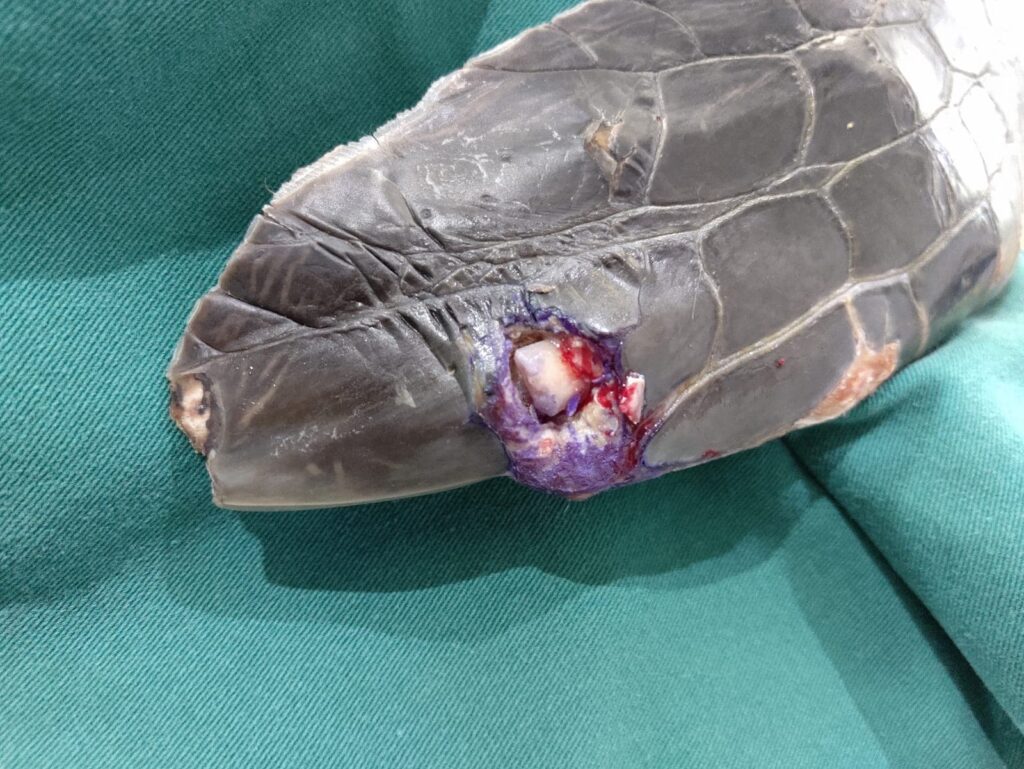 Finally, the proud flesh on her nose was carefully excised to remove the inflammation around her nostril, which would make it easier to breathe. All in all, the surgery took 4 hours. We waited with her while she came around, and I created a soft padded area for her to recover out of the water. 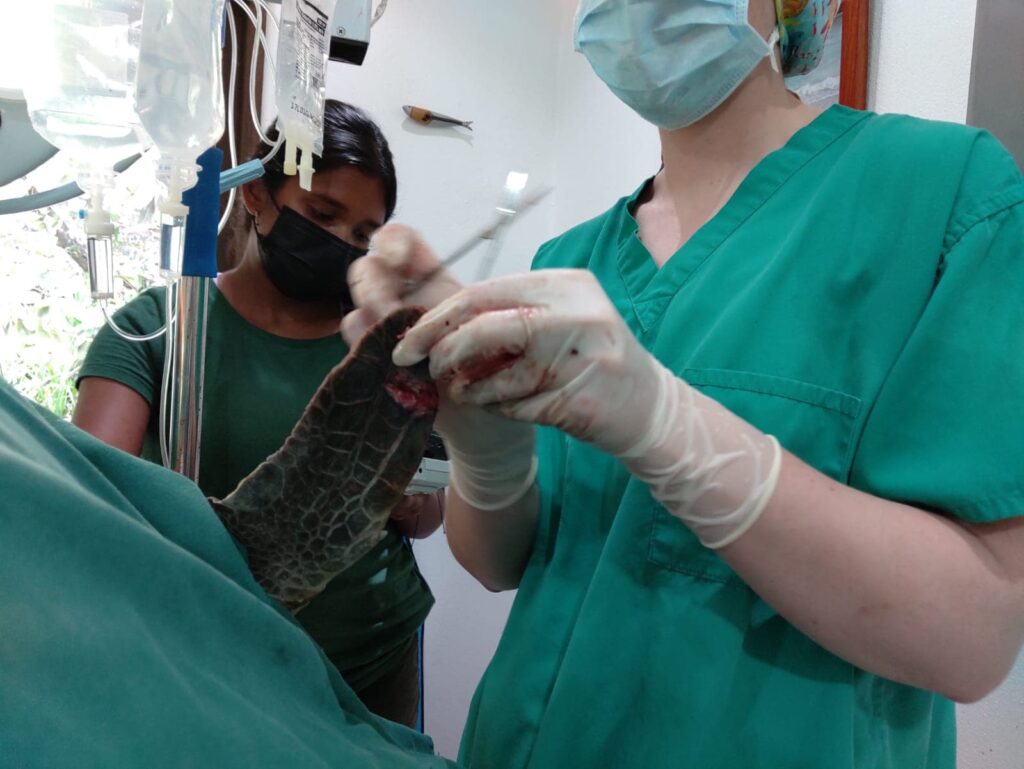 We checked on her periodically throughout the afternoon and she was not quite ready to go back into the water, so we left her a few more hours.

It was time for more freedive practice, so Minnie and I headed to our usual spot so we could practice free immersion. The visibility was absolutely shocking, much worse than we had seen the day before. The currents had changed and brought in a lot of plankton, so it was like diving in pea soup. After Minnie’s first attempt she came to surface, did her recovery breaths and told me she had seen something as she turned to come up. We stayed on the surface a while looking, and then suddenly two amazing creatures came into view. We were joined by two manta rays, taking advantage of the plankton soup. They barrel-rolled through the water effortlessly in a ballet with each other. Expecting them not to stick around too long we abandoned freedive practice in lieu of watching these graceful beings. Diving down to take a closer look, I was eye to eye with the larger of the two, and I was completely ignored as the feeding took precedence. At one point, the smaller manta came right to the surface within inches of Minnie’s face. They stayed with us dancing and feeding for around 30 minutes. I wish that I had taken my camera, but it is a memory that won’t be forgotten.

As they left us, we swam back to the line for more free immersion practice. Maybe it was the mantas that did it, but whatever it was, Minnie managed a PB of 9.1m! Breath control and body position were also much improved and we were both delighted by her progress. It was a great end to a very challenging but rewarding day.